Type 2 diabetes mellitus (T2DM) is a common chronic disease which is strongly associated with cardiovascular risk. Long-term high blood glucose level may induce cardiomyocytes apoptosis, cardiac dysfunction and fetal cardiomyocytes proliferation. Recent epidemiological studies have shown a link between antioxidant carotenoids and type 2 diabetes, but a comprehensive longitudinal study of this link has not yet been conducted.

We included participants who had biological measurements for both serum cis-β-carotene and fasting glucose from NHANES (2001–2006). We divided participants into quartiles by the serum cis-β-carotene levels and supported this associations with glucose metabolism using multivariable regression models adjusted for confounding factors. The mechanism of β-carotene levels in regulating plasma glucose levels were further investigated in vivo and in vitro. In addtion, we have carried out a preliminary exploration of the effect of β-carotene on diabetic rat and primary cariomyocytes.

We found that the higher cis-β-carotene (Q4) had a higher LDL-C level but with a lower fasting blood glucose. However, T2DM rats with β-carotene treatment showed decreased total triglycerides and LDL-c. β-carotene showed better cardiac function in DM+ group compared with diabetes groups (P<0.05). Our results also revealed that β-carotene to be an important protective factor of improving cardiac and mitochondrial function with diabetes exposure. At non-cytotoxic doses, β-carotene significantly increased glucose uptake in insulin-resistant cells. This potential effect is mediated by inducing the expression of GLUT4, the level of p-Akt and attenuating the phosphorylation of IRS-1. The analysis of gene expressions of PGC-1β and Nrf-1 showed a concordance between mitochondrial DNA content in PA-induced cardiomyocytes with or without β-carotene treatment, respectively.

Our results indicate that β-carotene can treat metabolic disorders by inhibition of IR
pathway in diabete. 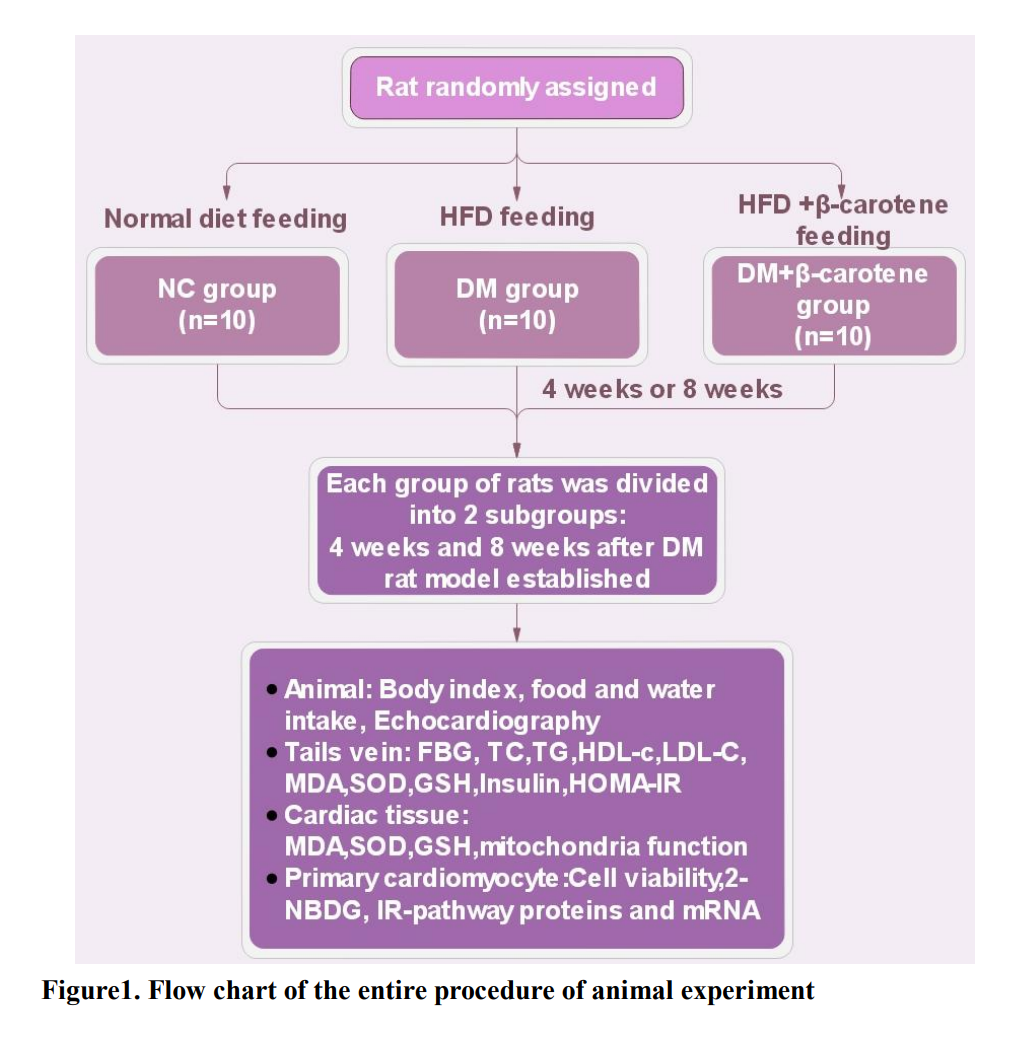