A 21-year-old man presented to an outpatient clinic with an 8-month history of hematochezia, abdominal pain, tiredness, and weight loss. His abdomen was soft, with mild left lower quadrant abdominal tenderness and active bowel sounds. Laboratory evaluation revealed a hemoglobin level of 10.4 g per deciliter (normal range, 13.5 to 17.5).

The physical examination showed skin ulcerations with both an irregular purple and a purulent base edge. The histopathological detection of an incisional biopsy sample separated from the ankle lesion revealed both superficial dermal and epidermal necrosis with leukocytoclastic vasculitis, an underlying mixed inflammatory-cell infiltrate and abscess formation. Direct microbiologic detection and cultures were negative for bacterial and fungal pathogens.

A diagnosis of pyoderma gangrenosum (PG) in ulcerative colitis was made. PG is an inflammatory skin disease with characteristics of rarity, chronicity and destructiveness, in which a painful nodule or pustule breaks down to generate a progressive and expansive ulcer with a undermined, tender and raised border (1-3). PG is usually related to systemic proinflammatory states, most particularly inﬂammatory bowel disease (4,5). Treatment can be extremely challenging, usually involving different kinds of immunosuppressive therapies (6,7).

In this patient, the debridement was given. Treatment with sulfasalazine was initiated, and 2 weeks later, methylprednisolone therapy was started. Four weeks later, dermatoplasty was performed. The cutaneous ulcers had diminished substantially, with residual superficial atrophic scars on the 7th day after the operation (Figure 1F). He was discharged home with synchronous resolution of hematochezia and abdominal pain symptoms, as well as with outpatient follow-up. 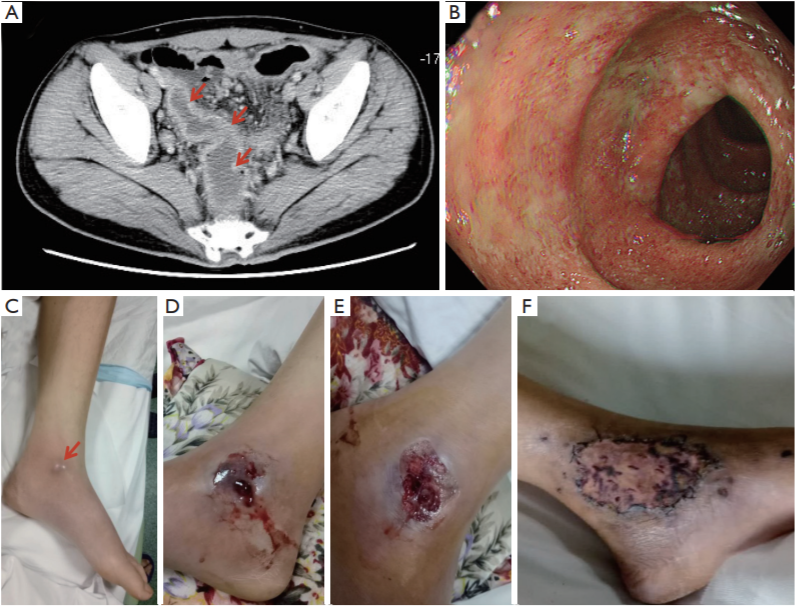